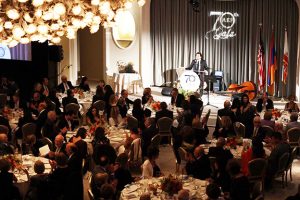 The momentous event was held on January 26.at the iconic Beverly Hills Hotel. The gala opened at 5:30 p.m. with a cocktail hour, followed by dinner at 6:30 p.m.

The evening kicked off with a performance of the American and Armenian national anthems sung by Talia Avedissian and Araz Arabian, students from Mesrobian School and Holy Martyrs Ferrahian High School, respectively. Both schools were co-founded by the AEF as pillars of education for Armenian students in America. 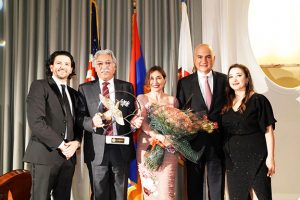 Opening remarks were made by AEF President Peter Baghdassarian, who welcomed guests and thanked committee members for making the sold-out event a big success. Baghdassarian then introduced Armine Haroyan, AEF’s administrator in Yerevan, who herself was an AEF scholarship recipient.

Haroyan shared with the audience the impact of AEF’s generosity on her life and the lives of hundreds of other scholarship recipients in Armenia.

AEF Vice President Dr. Aida Rechdouni then introduced Vahik Petrossian, the recipient of AEF’s Lifetime Service Award for his decades of service to the organization. This recognition prompted an anonymous donation of $50,000 in honor of Petrossian. 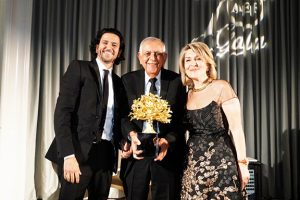 Western Prelate Archbishop Moushegh Mardirossian delivered his congratulatory remarks, in which he lauded the AEF’s mission of spearheading the establishment of Armenian Schools here within our community and abroad, providing valuable resources to existing schools, scholarships to students, and much more. He blessed and commended the members and volunteers for their utmost dedication to providing opportunities for our youth to achieve a bright future, as well as the generous sponsors and donors who make it possible for the AEF to fulfill its goals. He recognized in particular the evening’s honorees and their tremendous contributions to the vital and noble cause of educating our youth.

The Prelate then announced that in response to an appeal of the AEF Board, he and the Executive Council humbly requested from His Holiness Catholicos Aram I to honor Sam and Sylva Simonian for their pioneering work through the TUMO Center, to which the Pontiff responded favorably. Thus, he invited the Simonians to the stage to present to them the “St. Mesrob Mashdots” emblem and Pontifical encyclical on behalf of His Holiness. In the encyclical, His Holiness had commended the Simonian’s valuable input within the Armenian Educational Foundation and especially their significant contributions on a pan-Armenian level through their founding of the TUMO Center.

To learn more about AEF or to become a member, scholarship sponsor or donor please call the AEF office at 818.242.4154, or visit AEF’s website.