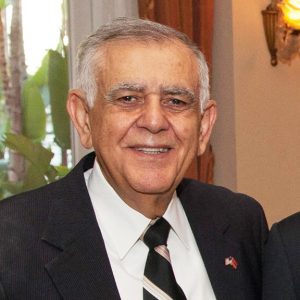 The Armenian Educational Foundation will honor Vahik Petrossian at AEF’s 70th Anniversary Gala. Petrossian will receive AEF’s Lifetime Service Award for his devotion and dedication to AEF and his support to the Armenian community. The gala will be held on Sunday, January 26, 2020 at The Beverly Hills Hotel.

Vahik Petrossian has been an AEF member since 1987, having served on the Board of Directors for 29 years and as Board President for four years. He currently serves as the chair of the Armenian scholarship program, which awarded over 430 scholarships in Armenia, Javakhk, and Artsakh in the 2019 to 2020 academic year.

Vahik Petrossian, along with his family, has sponsored the renovation of village schools, scholarships, and Armath Laboratories. When he isn’t volunteering his time at the AEF office in Glendale, he is traveling to Yerevan to take part in the scholarship selection process, as well as working on other AEF projects. Petrossian has dedicated countless hours of service to the organization and is responsible for establishing and organizing the very successful AEF scholarship program and the oratorical contest.

Petrossian has held leadership positions in the AYF, ANC-WR and other organizations, at both local and state levels, including President of AYF’s West Coast Council. He was also heavily involved in the founding of St. Mary’s Tufenkian Pre-School and Chamlian Armenian School.

Prior to his retirement, he was a Transportation Engineer with the State of California, he served as the Manager of the California Public Utilities Commission’s Rail Safety Program, Supervisor Mike Antonovich appointed him to the Los Angeles County Block Grants Commission, and he also served two terms as a Civil Service Commissioner for the City of Glendale.

“We are pleased to be honoring Vahik Petrossian, a long time AEF sponsor, board member and dedicated volunteer. Our community is richer by the exemplary service and commitment of individuals like him,” states AEF Board President Peter Baghdassarian.

The 70th Anniversary Gala will begin with cocktails at 5:30 p.m., with dinner and an awards reception following at 6:30 p.m. Proceeds from the gala will fund AEF’s charitable programs, including computer engineering labs in village schools, university scholarships, and other educational projects.

Since 1950 AEF has provided financial assistance to Armenian students and educational institutions. For more information, please call 818.242.4154 or e-mail aef@aefweb.org.