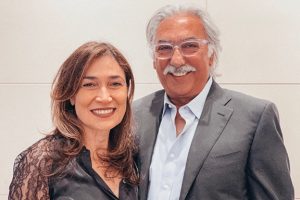 The Armenian Educational Foundation will honor Sam and Sylva Simonian at AEF’s 70th Anniversary Gala. The Simonians will receive AEF’s Lifetime Achievement award for their pioneering work in establishing the Tumo Center for Creative Technologies. Recognizing that technology will have a tremendous impact on the economic growth of Armenia, the Simonians were determined to provide every student in Armenia with the technological skills to successfully compete in the 21st century.

At Tumo, students 12 to 18 of age are provided free training in 14 different focus areas, including programming, web design, robotics, animation, game development, music, and 3D modeling. The software for each of these programs is developed in-house by Tumo staff. New programs in artificial intelligence and health sciences are currently in the making.

In addition to Tumo Yerevan there are centers in Dilijian, Gyumri, Stepanakert, and Koghb. Together they serve over 20,000 students. Eleven more centers are scheduled to be built and approximately 20 Tumo boxes. Boxes are similar to a railroad box car and are portable. This network of centers and boxes is designed to cover the entire country, so students from even the most remote villages will have access to Tumo’s technology. The goal is to be the first country in the world to provide technical education to every student.

Tumo has also become an international phenomenon with centers now in Paris and Beirut. Government officials in Moscow, Berlin, and Tokyo are also planning to build Tumo centers. The fact that cities outside of Armenia want to establish Tumo centers demonstrates the important contribution the Simonians have made in Armenia.

“We are very excited to be honoring Sam and Sylva Simonian,” stated Al Cabraloff, 70th Anniversary Gala Committee Chair. “These two remarkable individuals have created one of the most innovative educational institutions in the world, which will have tremendous impact on the future economy of Armenia.”

Promising a sell-out crowd, the gala will take place on Sunday, January 26, 2020 at The Beverly Hills Hotel in Los Angeles. This elegant evening will begin with cocktails at 5:30 p.m., followed by dinner and awards at 6:30 p.m. Proceeds from the gala will fund AEF’s charitable programs, including computer engineering labs in village schools, university scholarships, and other educational projects.

Since 1950, AEF has provided financial assistance to Armenian students and educational institutions. For more information, please call 818.242.4145 or email us at aef@aefweb.org.