As donors to the Armenian Educational Foundation (AEF), perhaps the greatest satisfaction is knowing that the scholarships and construction or renovation of schools is providing extraordinary changes in the lives of our future generation, the hope for our homeland. Our students with admirable aspirations, continue this act of giving by performing good deeds themselves.

Two years ago, during the 44 Day Artsakh War, Davit Stepanyan received multiple injuries, initially a brain concussion after being hit by a bomb on the battlefield. His comrades took him to an ambulance, which was damaged and before they could find another car, the enemy delivered a second blow, in the form of cluster bombs. As a result, Davit’s carotid artery was severed and he was transferred to Stepanakert in critical condition. After a surgical intervention, he was rushed to Yerevan in an unconscious state, having also suffered an ischemic stroke.

Thankfully, Davit’s life was miraculously saved and he began walking and speaking again and working towards an academic career. Davit was awarded an AEF scholarship for his studies at Ministry of Emergency Situations of the Republic of Armenia majoring in Crisis Management.

Despite health issues, Davit and our other injured veterans are volunteering behind the scenes, delivering supplies to the soldiers on the front lines and, most importantly, showing by their own example that no matter what, they should never, ever, give up.

Indeed, Davit’s words are an inspiration to all Armenians throughout the world:

“The war is not over for us yet, and every Armenian, regardless of work, financial situation and family problems, must do his best for the Motherland until his last breath. We don’t have a place to retreat anymore…”. 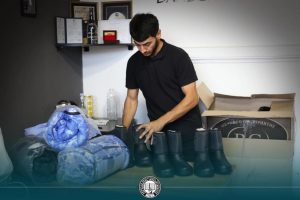