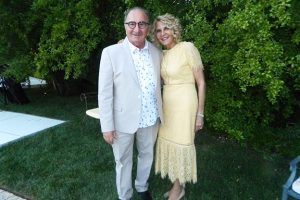 GLENDALE— This year marks the 70th anniversary of the founding of the Armenian Educational Foundation. To celebrate AEF’s 70 years of accomplishments, a pre-gala kick off dinner was held on September 8, at the home of long-time members Rafik and Helly Khatchaturian in La Cañada, CA. The dinner welcomed more than 80 of AEF’s long-standing members, scholarship sponsors, and supporters. During the pre-gala gathering, guests were briefed on the plans for the celebration, as well as sponsorship opportunities.

AEF President, Peter Baghdassarian, opened the evening by welcoming the guests to the dinner on behalf of the Khatchaturian family and expressed his appreciation to the family for opening their beautiful home to AEF. A short overview of AEF’s recent projects and future endeavors were presented, with a focus on the success of Armath Engineering labs in village schools – surpassing his own goal of 400 scholarships by the end of the year. President Baghdassarian noted that, in 2007, during the first year of the new scholarship program, AEF provided 21 student scholarships. This year, AEF has supported 430 students in Armenia, Artsakhk, and Javakhk with full tuition scholarships.

In closing, host Rafik Khatchaturian thanked all attendees and shared his excitement for the 70th Anniversary Gala. He also thanked the Gala Committee for presenting a gift and shared his gratitude for his wife, Helly, for all her hard work in organizing the event. The night was ultimately a success, with AEF raising over $150,000 in pre-sale sponsorship and table sales for the 70th Anniversary Gala.

AEF’s 70th Anniversary will be celebrated on January 26, 2020 at the Beverly Hills Hotel in Beverly Hills. Honorees are to be announced shortly.

The following sponsorships are available and sponsor names will be published in the event program:

For 69 years, AEF has provided financial support to students and educational institutions. Since 2000, AEF has disbursed $7.2M for various education programs, including $4.4 million renovating 200 village school projects in Armenia and Artsakh, and $1.8 million in scholarships. This, of course, could not have been possible without the generous support of their donors.