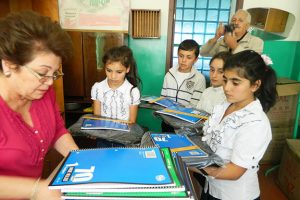 Javakhk: a place not known by many Armenians. A region in Georgia where nature abounds and hardship endures. A place where education matters.

We arrived while potatoes in the region were being plowed, due to the anticipation of fall and winter’s heavy rain. Many students, parents, Babiks and Dadiks left their daily responsibilities behind to receive backpacks filled with school supplies—because education matters.

They walked on dirt roads, and found rides from their villages, to come to the Akhalkalk ARS center in order for their children to have school supplies—because education matters.

Gathered in a small room, students and families awaited our arrival. Bright and bashful faces gave a slight sigh of relief when we walked in; fulfilling their desire of having supplies. To most kids, this was their first backpack filled with supplies. AEF distributed over a hundred backpacks filled with supplies to underprivileged students— because education matters no matter where we are. We all felt as one; parents, grandparents, students and volunteers.

A father had brought his four children to receive supplies, the youngest one starting first grade. They patiently waited in line for their turn while the youngest one slept in his father’s arms. With bashful downward glances, they took their backpacks and left.

An hour later, when we finished and I was walking on the street, I saw them sitting on the door steps of a market waiting to return to their village; sharing two small bags of potatoes chips between the four of them. They recognized me and ran up with their bag of chips to offer me the little they were sharing. I was reluctant to take from what they had so little of, however their smiling faces was their testimony to how one’s greatness is not measured by what one has, but what one gives.