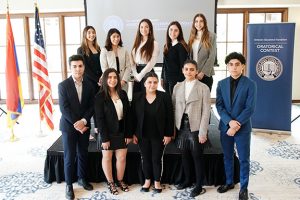 The Armenian Educational Foundation’s fourth annual Oratorical Contest drew in over 100 supporters. This year, the contest was held on February 22 at the Chevy Chase Country in Glendale, California. The hall was generously donated for the event by the country club owners, Nick Agakanian, Vatche Kouyoumdjian, and Esteban Nazarian.

Representatives from all five local Armenian high schools attended and participated in the Armenian and English language speech competition. The participating schools included:

The topic for the Armenian segment related to the impact of social media on our society and the English competition topic addressed issues associated with emigration from Armenia. The judging criteria were based on the American Legion National Oratorical Contest guidelines.

The professional experience of the panel of judges encompassed a variety of backgrounds, including, education, linguistics, law, broadcast journalism, and performing arts. The distinguished judges included:

The winners of the 2020 AEF Oratorical Contest were Alik Artinian (10th grade) representing Armenian Mesrobian School for the Armenian language competition, and Nareh Aghakhanian (12th grade) from Rose & Alex Pilibos Armenian School for the English contest. Each winner was awarded with a $1,000 prize.

“I am so happy to see that the Armenian Educational Foundation created a competition, which emboldens students to take the art of communication seriously,” remarked Lory Tatoulian. “I was completely impressed by the oratorical prowess of these young high school students. They displayed such confidence in their presentations, replete with intelligent opinions and animated delivery, articulating thoughts and forward-thinking ideas,” she added.

AEF’s purpose in hosting the Oratorical Contest is to promote public speaking in Armenian youth, with the hope of encouraging and shaping a future generation of leaders, motivators, and influencers who can become a positive force and promote progress within their community.

For more information on the Armenian Educational Foundation or to donate online, please visit the AEF website.