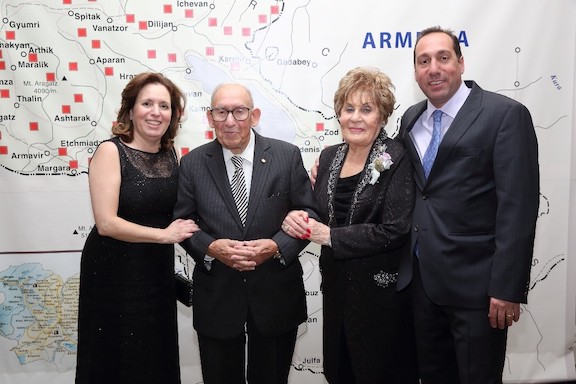 The Armenian Educational Foundation’s Board of Directors and Scholarship Committee announced the 2020-2021 Richard R. Tufenkian Scholarship Award recipients. Three $3,000 scholarships have been awarded to Armenian undergraduate students at accredited United States colleges or Universities. To qualify for this scholarship, students had to be of Armenian descent, have a minimum 3.0 grade point average, show financial need, and be actively involved in the Armenian community.

In total, 51 applications were received for the Richard R. Tufenkian Scholarship. The committee diligently reviewed and selected the following three students.

Arman Ghazaryan (Vayk, Armenia)
Arman Ghazaryan was born in Armenia in 1998. He is a rising sophomore at the University of California, Los Angeles (UCLA) majoring in Business Economics and minoring in Statistics with a 3.7 GPA. Arman graduated from Quantum College International Baccalaureate program in Armenia in 2016. While in high school he has received multiple awards including the annual educational award of the President of Armenia in IT sphere in the nomination of the best high school student of the year (2015), as well as the annual award of the Quantum College as the best college student of the year (2015).

Arman participated in numerous volunteering activities/projects in Armenia including providing training and support to the communities in the bordering areas with Azerbaijan that significantly suffered from conflict, tutoring children in the Nubarashen community of Armenia, and other community service projects organized by different Armenian and International organizations such as AGBU, Fuller Housing, Rotary and Rotaract Clubs Yerevan-International. He also interned with Gyumri TechnoPark and the Constitutional Court of the Republic of Armenia.

Arman was admitted to UCLA in 2016, but after completing the first quarter, was called up to active military service by the Ministry of Defense of Armenia. He spent the next two years in the Armenian Armed Forces as a conscript. He returned to the United States in 2019 with deeper motivation and determination to finish his education and pursue a career in corporate finance with a particular interest in investment banking. Arman hopes to one day be able to support other young Armenians from our homeland to pursue their dreams and receive an education at a world renown university.

Kami Arabian (Glendale)
Kami Arabian was born in Glendale, California in 2002. He graduated from Rose and Alex Pilibos as one of the valedictorians for the class of 2020 with an unweighted 4.0 GPA. During his time at Pilibos, Kami served his classmates as a representative in the student council, later to be elected president during his senior year. Kami was involved in his school’s Model United Nations team, serving as its secretary-general. Through these experiences, Kami developed a passion for public service, and as a result, he decided to take an internship in the Office of Senator Anthony Portantino under the direction of the staffer who was responsible for representing environmental issues across the district. Kami supplemented this experience by later interning in the administrative division of the Glendale Department of Water and Power, where he developed an understanding of the policies that impact his local community.

Recently, Kami was admitted to Dartmouth College, an Ivy League institution located in New Hampshire, where he plans to double major in environmental engineering and political science and graduate by 2024. Upon completing his education at Dartmouth College, Kami intends to pursue a degree in law, with the goal of starting his own firm one day in the future. He is determined to give back to the Armenian community since he recognizes the important role that it plays in the success of future generations

During her junior year of high school, Anaida was an exchange student in the state of Kansas through the Future Leaders Exchange (FLEX) Program. This cultural exchange inspired her to give back to her communities both in Armenia and the US by participating in and initiating community service activities, local clean-up projects, educational workshops, and leadership programs. She is the first of her family to pursue a degree in the United States and hopes to be successful enough to start her own scholarship fund in the future to make education accessible to all Armenians. In her free time, Anaida enjoys playing the piano, reading, and photography.Anaida Fahradyan (Yerevan)
Born in Yerevan, Armenia, Anaida Farhadyan has recently completed her freshman year at Wilson College in Pennsylvania, with a 4.0 GPA. Anaida is pursuing an undergraduate degree in Business Management, History and Political Science, and a minor in Spanish – her fourth language. She expects to complete her Bachelor’s in May of 2023. Anaida’s parents are both still living in Yerevan, with her mother unemployed and her father unable to finance Anaida’s education on an Armenian income. Anaida is the recipient of multiple awards and honors, including: President’s Volunteer Service Award, Valedictorian at her high school, Student of The Year Award, over 100 community service hours’ award, “best delegate” award at Euro Youth Parliament Yerevan Regional Session, Athlete Award in Cross Country and Track, Armenian Language Olympiad, and International Linguistics Olympiad.

The Richard R. Tufenkian Scholarship Fund was established by Ralph and Savey Tufenkian in memory of their son Richard. The $230,000 endowed fund has provided over $470,000 in scholarships since 1991. Currently, $17,500 in scholarships is awarded each year, including $2,500 to a student attending the American University of Armenia and six full tuition scholarships for students attending public universities in Armenia.

AEF is most grateful to the Tufenkian Family for their commitment to helping Armenians globally through their philanthropy, unconditional love, and continued support of the education and advancement of Armenian youth in the United States and abroad.