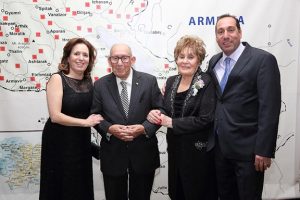 GLENDALE—The Armenian Educational Foundation’s Board of Directors and Scholarship Committee are pleased to announce the 2019 – 2020 Richard R. Tufenkian Scholarship Award recipients. Three $3,000 scholarships have been awarded to Armenian undergraduate students at accredited United States colleges or universities. To qualify for this scholarship, students had to be of Armenian descent, have a minimum 3.0 GPA, show financial need, and be actively involved in the Armenian community.

In total, 52 applications were received for the Richard R. Tufenkian Scholarship. The committee diligently reviewed and selected the following three students.

Vahe Minasian was born in Philadelphia in 2001. He is currently a Freshman at Drexel University majoring in Bio Science (pre-med) with a 3.6 GPA. He is currently part of the Latin National Honor Society, Science National Honor Society, a 2nd Degree Black Belt, and currently works at Panera Bread to support himself through school. Vahe is also a part of the Malvern Prep Concussion Research Team, a two-year project he joined after suffering a concussion himself. He also volunteers with Our Lady of Armenia Orphanage, ACYOA Philadelphia VP, Soars JR, Youth Rep for Philadelphia Genocide Walk, and many more. His serious concussion ruled him out as a hockey player and plagued him with injuries, causing devastating emotional pain due to his love for hockey and he struggled to maintain his grades, but fought through to keep up. He learned everything he could about concussions and stayed engaged with hockey and now provides clinical instructions to young players. Vahe plans to become a doctor and work in Sports Medicine or as an Orthopedic Surgeon. He plans to work in Armenia over the summer and help kids who have suffered from concussions in order to improve the lives of many in Armenia, specifically those injured in sports, so that they may heal and continue playing. Vahe will graduate in June of 2023.

Ani Abovian was born in Glendale in 1999. She is currently a senior at University of California, San Diego with Provost Honors majoring in Psychology and Human Health with a 3.7 GPA. Her father is a priest. Ani has been admitted as an intern at a cognitive Psych lab at UCSD. She has visited Armenia a total of five times, interning in the medical field, and working with children with special needs. She has also volunteered in Armenia with the Christian Youth Mission, Fuller Housing Project in Dvin, Armenia, Izmirlian Medical Center, and more. Ani currently works as a behavior therapist at the Center for Autism part-time to help with her financial burden. She is looking to create awareness about mental health and target a revolution in the psychology and therapy fields of Armenia regarding mental disorders, by creating a solid system and helping children with autism to end the stigma. She hopes to continue school and receive a doctorate in Psychology. She is on track to graduate, with cum laude honors, in June 2020.

Haig Cholakian was born in the United Arab Emirates in 1999. He is currently a Junior at Harvard University majoring in Applied Math with a 3.9 GPA. As of now, he is two years into an Honors Bachelor of Arts Degree in Applied Math, and has already completed 20 pages of his thesis research in the topic of “Food Distribution History in Watertown Armenian Stores.” Haig is also registered to receive a minor in Computer Science. He has received the John Harvard Scholar Award for being in the top 5 percent of his class. Haig is the incoming Editor-in-Chief of the Harvard International Review, the college’s oldest journal. He is also the founding president of the Harvard Global Education Movement, a non-profit working for the underprivileged abroad. Through HGEM he was able to sponsor and teach a two week coding workshop at TUMO for young Women in STEM. He is also an active member of the Armenian Student Association at Harvard and a monthly donor supporting the education of a young Armenian boy. In his first three semesters, he managed to complete 15 courses, 3 more than the norm of 12. Haig Cholakian is set to graduate from Harvard University in May of 2021. He was a previous Richard R. Tufenkian Scholarship recipient.

The Richard R. Tufenkian Scholarship Fund was established by Ralph and Savey Tufenkian in memory of their son Richard. The $230,000 endowed fund has provided over $470,000 in scholarships since 1991. Currently, $17,500 in scholarships is awarded each year, including $2,500 to a student attending the American University of Armenia and six full tuition scholarships for students attending public universities in Armenia.
AEF is most thankful to the Tufenkian Family for their commitment to helping Armenians globally through their philanthropy, unconditional love, and continued support of the education and advancement of Armenian youth in the United States and abroad.