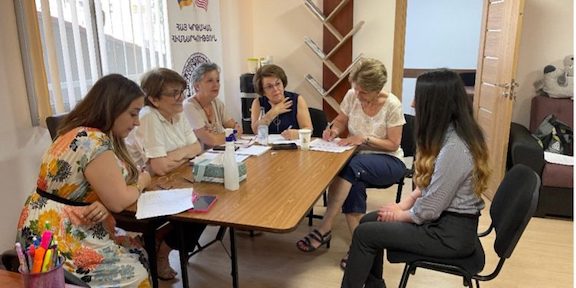 This year AEF’s Yerevan office received 1,700 scholarship applications, including 37 soldiers wounded in the 44-day war, 11 who lost their brothers, as well as 58 applicants who served during the war and returned safely. These 106 applicants were granted automatic scholarships.

Of the 1,600 other applicants, approximately 600 are being interviewed over a two-week period (June 14 to 26) and 230 new scholarships will be awarded in addition to the 432 continuing scholarships. The Scholarship Committee will have to complete its difficult task of screening, interviewing and selecting the recipients.

AEF encourages its members and sponsors to participate in the interview process when in Armenia and play a role in the decisions shaping its future.

Participating on the interview panel for the first time was Zaroug Chilingirian Baltajian, a very active member of the Phoenix Arizona Armenian Community. She was traveling throughout Armenia when she chose to take part in the interview process, as a panelist, and witness for herself, the bright and vibrant future of Armenia.

The following was posted on her Facebook page: “I volunteered as a scholarship interview panelist for the Armenian Education Foundation for a few days and it was the hardest thing I have ever done in my life. There are over 500 students who need our help. These students come mostly from different regions and villages. I have witnessed just how bright and intelligent they are, with GPA’s of 3.5 and above. Most of these students have lost a parent or a sibling in the war, and some have themselves served and protected. I will not be going back to volunteer as I couldn’t handle the emotions of listening to these stories. I spent an entire day in bed crying, contemplating how I would grant scholarships to specific students, when every single one of them deserve to attend college without the burden of financing their education.”

A $1,000 donation covers the full tuition for the academic year of one University student. AEF recommends a four-year commitment so that students feel supported from beginning to graduation.